Devices supporting the latest 802.11ac (draft) standard are now being certified by the Wi-Fi Alliance. 802.11ac promises various improvements over 802.11n. Starting from the first IEEE 802.11 standard in 1997 to the latest 11ac standard, there have been improvements in various aspects of 802.11 networks - speed of the network being one of the major improvements. This article attempts to explain the PHY data rates of 11b, 11a/g, 11n and 11ac.

The above diagram shows the modulation techniques used in different 802.11 PHYsical layers. 802.11 systems support two (Ignoring the optional and obsolete types) types of modulation - DSSS/CCK and OFDM. This article is not going to cover the details of DSSS/CCK (a good intro can be found here) and OFDM. The below figure gives an overview of both the techniques. 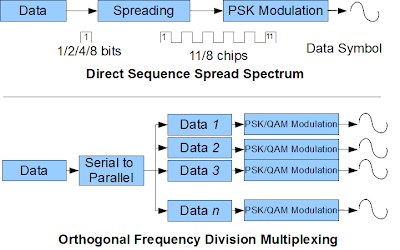 DSSS/CCK (11b Date Rates)
DSSS/CCK data symbol is formed by spreading and modulating the data bits. The data rate depends on :

DSSS/CCK uses the entire available bandwidth as one single channel. OFDM divides the channel into multiple(overlapping) sub-channels. The data rate depends on:

The maximum data rate is achieved with MIMO and maximum channel width. 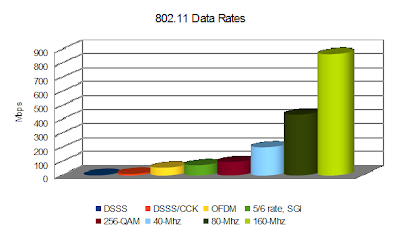 Posted by Sumanth Kavuri at 8:06 AM

Email ThisBlogThis!Share to TwitterShare to FacebookShare to Pinterest
Labels: 802.11 basics